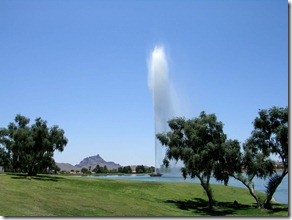 The Town of Fountain Hills is a master planned community carved out of one of the largest cattle ranches in Arizona in 1970. The community has one of the lowest density ratios in the valley, being just shy of 2 people per acre. The total population is expected to max out at 30,000. Fountain Hills is land bound, with the McDowell Mountains and Scottsdale to the west, the Fort McDowell Yavapai Nation to the east, the Salt River Pima Maricopa Indian Community to the south and the McDowell Mountain Regional Park to the north.

The views are magnificent; the rolling hills offer almost every home a view of either the desert washes or McDowell Mountains. As you enter the town from the west on Shea Boulevard, it feels as if you are climbing more than the 500 ft altitude above the Phoenix valley. The feature of the town’s center is the fountain, a giant water lily sculpture in the middle of a lake which sprays for about 15 minutes on the hour. It is in competition for the world’s highest fountain, spraying 560 ft into the air when all 3 pumps are operating. The normal usage is 2 pumps with a plume of about 300 ft.